Yesterday was the release of the first of a three part blog about the magnificent summer that awaits English sport’s fans. If you missed it then don’t worry, it’s never too late to read it. A Good Summer Ahead for the English! (Part One)

So today marks the start of another huge tournament with the first match played between favourites England and perennial “chokers” South Africa.

The blue ribbon event of the cricketing world is upon us again. Originally contested by eight nations in 1975, this year’s event will witness the top ten cricketing nations fighting it out to be crowned world champions. All of the partaking nations will play each other in a round robin tournament, with the top four going on to contest the semifinals. The cricket fest will come to an end on July 14th at the Mecca of cricket, Lord’s Cricket Ground, London.

The nations in order of world ranking: 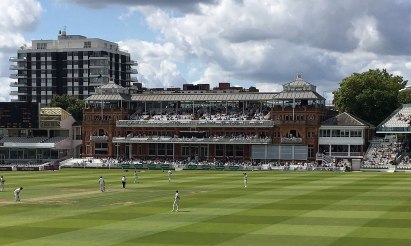 The main pavilion (left), and the media centre at the home of cricket. (Via WikiCommons)

Do England deserve to be the favourite?

England are easily the best ODI (one day international) team in the world. A combination of aggressive batting, and above average bowling has helped the creators of the sport become the best at it. Since the last World Cup in 2015, England have won around 70% of all ODI’s played. A feat that no other nation can surpass. In the meantime, they have also accumulated four of the largest run totals with the relentless stroke making abilities of their top order batsmen. In the likes of Jason Roy, and Johnny Bairstow, England has the most destructive opening partnership in world cricket. Follow that up with Jos Buttler, a man on a mission to demolish every bowler’s self-confidence. Buttler scores big and scores fast, an important asset when it comes to limited overs cricket. In fact, only on five occasions has a nation scored over 400 runs in an innings since the last World Cup. South Africa once and England four times (Usually a score over 300 is deemed good, depending on the conditions).

However, that same aggression when batting can lead to a massive collapse on the wrong day, which is where the bowlers need to step up. Something that they are more than capable of doing with the likes of Adil Rashid, Moeen Ali, Tom Curran, Chris Woakes, Mark Wood and the recent addition to the squad of Joffrey Archer. The latter has made a name for himself in recent years as a specialist of the short-game (T20/ODI).

With all this firepower, a smart leader is necessary. Enter Eoin Morgan. Ironically, Morgan is Irish-born, but captains the three-lions after switching allegiances in 2009. He is one of only two players to score a century – 100 runs in an innings – for two different nations. The other being Ed Joyce, who went from England to Ireland. Eoin Morgan is labelled as a “finisher” thanks to his hitting ability towards the end of a game, and that nickname may get put to the test on many occasions during this tournament.

Who are the other possible champions?

Most final appearances (7), most wins (5) and the reigning champions. Australia have won four of the last five tournaments and have long been a force in all formats of the game. However,  in recent years, this cricketing nation has been hit with major issues. Most recently, Steve Smith, who captained the Aussies in all forms of the game, and vice-captain David Warner, both received lengthy suspensions for ball-tampering. This is basically the equivalent of when Tom Brady may or may not have reduced the air in the football’s being used when playing for the New England Patriots.

Both Warner and Smith have served their suspensions and are back in the squad, which could prove a huge factor as they both come into the tournament on the back of some great individual performances. I expect Warner to be one of the leading run scorers in the tournament, and Smith to aid current captain Aaron Finch in making the right decisions.

The only country to snatch a World Cup from the Aussies when they won on home soil eight years ago. The chances of another success seems unlikely. However, any team with Virat Kohli in their ranks, has a chance. He is a messiah in the world of cricket. He is Ronaldo and Messi combined when it comes to hitting a ball with a bat. Backed up by the enigmatic MS Dhoni, India always have a chance. Unfortunately for Indian fans, this team are definitely much better in the kind of conditions expected in the sub-continent. England and Wales don’t really fit that bill. Nonetheless, you can never count them out.

Now this is a fantastic team, built with a great foundation and the ability to destroy opposition batting line-ups. Every other nation is definitely better at batting than bowling. Same can’t be said about the Kiwis. New Zealand have named six specialist bowlers. Four of those are world class, two are good. Their opening bowlers Trent Boult – who I think will be the top wicket-taker in the tournament – and Tim Southee have on many occasions ripped through the batting line-up of the opposition.

Don’t get me wrong, they have decent batsman who can score big, too. The likes of captain Kane Williamson, opener Martin Guptill, Ross Taylor and Colin Munro can all go big, but relying on them to consistently score heavy is not a smart move.

Other players to watch (Not included in the aforementioned nations):

Kagiso Rabada and Dale Steyn (South Africa): The pair have been the linchpin for the Proteas bowling attack. Two stars for a team that lacks the quality of previous generations.

Chris Gayle (West Indies): The phrase “fetch that” is perfect for this man. Chris Gayle has one of the heaviest bats in the game, and when he swings his wood, balls go flying.

Rashid Khan (Afghanistan): Watching Rashid Khan bowl is a joy. He is a spin bowler with the ability to spin the ball both ways, and that makes for some exciting viewing. I am a huge fan!

Tamim Iqbal (Bangladesh): Tamim has had to change his batting in recent years as his team relies on him to bat deep into the innings. Yet, he is still an exciting batsman who likes to smash the bowlers around.

On their day, any one of the teams could go a long way and essentially win the tournament. No matter what happens, an exciting five weeks awaits; full of runs, wickets and drama, as long as the British summer allows for it.

School trip to Beijing Water Town. When I see this many kids in one place, I would’ve naturally turned away and gone home...not an option this time. #school #trip #beijing
A great day out to Beihai Park （北海公园）before the major crowds came flooding in.
I know I didn’t order this!
Nando: “We must spoon for warmth, and need a comfortable place to do it...”
Loading Comments...
Comment
×
<span>%d</span> bloggers like this: